The Corporation of the District of Fraser Mills fonds

Did you know that all archives have backlogs? Archivists define backlogs as records that have been acquired but have yet to be processed. Backlogs grow because processing archival records — or arranging and describing in archival parlance — is labour intensive. In 2014, Library and Archives Canada (Canada’s National Archives) announced plans to eliminate a whopping 98,000 container backlog!

Happily, due to the excellent work of City of Coquitlam Archives staff our backlog is small and navigable allowing investigation into ‘often untold stories.’

Until recently, most of the Corporation of the District of Fraser Mills records remained unprocessed. The Archives had previously processed a small selection of records. However, around 3 metres of textual records, housed in their original Shannon Files remained. 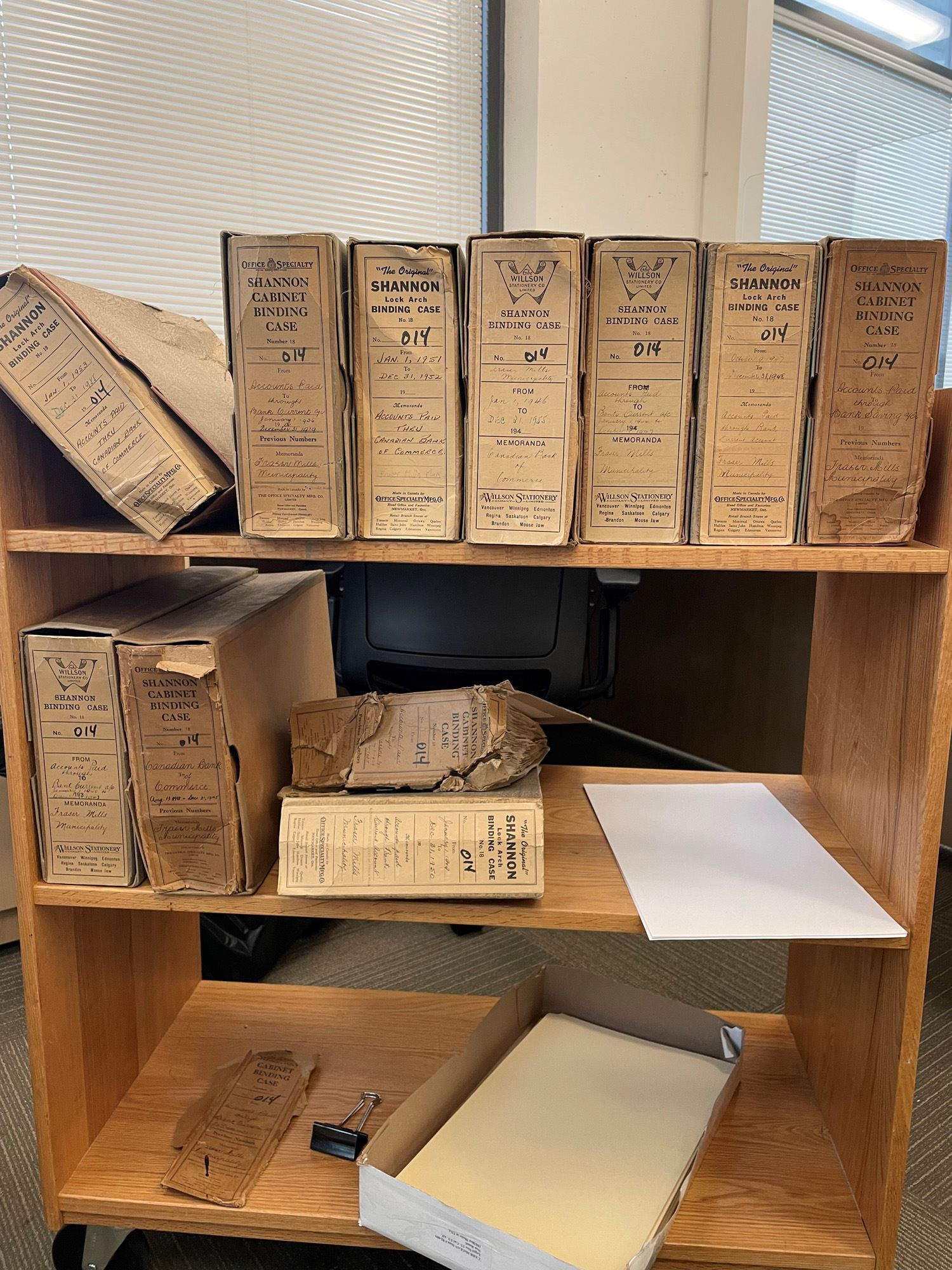 Thanks to the herculean efforts of Archives staff, the records have been processed and their descriptions uploaded into Quest, the City of Coquitlam Archives database. This web exhibit discusses our interesting discoveries. 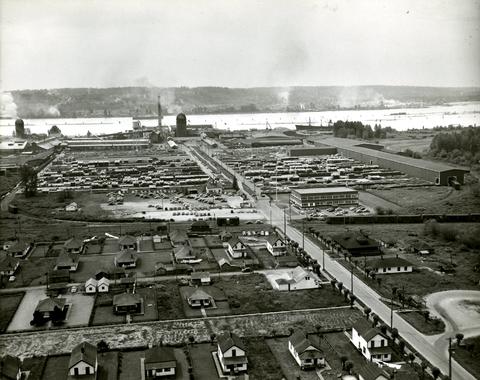 One of the largest groups of processed records are the financial accounts that list the expenditures of the municipality. Initially, judging by titles, the meticulously kept financial records didn’t appear to hold much interest, beyond the listing of financial sums paid by the municipality. However, it has been known that Fraser Mills was also home to a multicultural community, including many with Japanese and South Asian backgrounds who settled in Fraser Mills to work at the Canadian Western Lumber Company Sawmill, in addition to the large Francophone community at the time. However, until now, there were few archival records that documented this.

Among Fraser Mills’ financial records are hospital invoices that the municipality paid for its residents’ healthcare as part of the Hospital Act. On a hospital invoice issued by The Royal Columbian Hospital on December 14, 1935, to document a surgical procedure, the name “K. Maruyama” appears. The form notes that K. Maruyama has lived at Fraser Mills for 25 years, is a self-employed fisherman and that his nearest relative is a son, “K.” 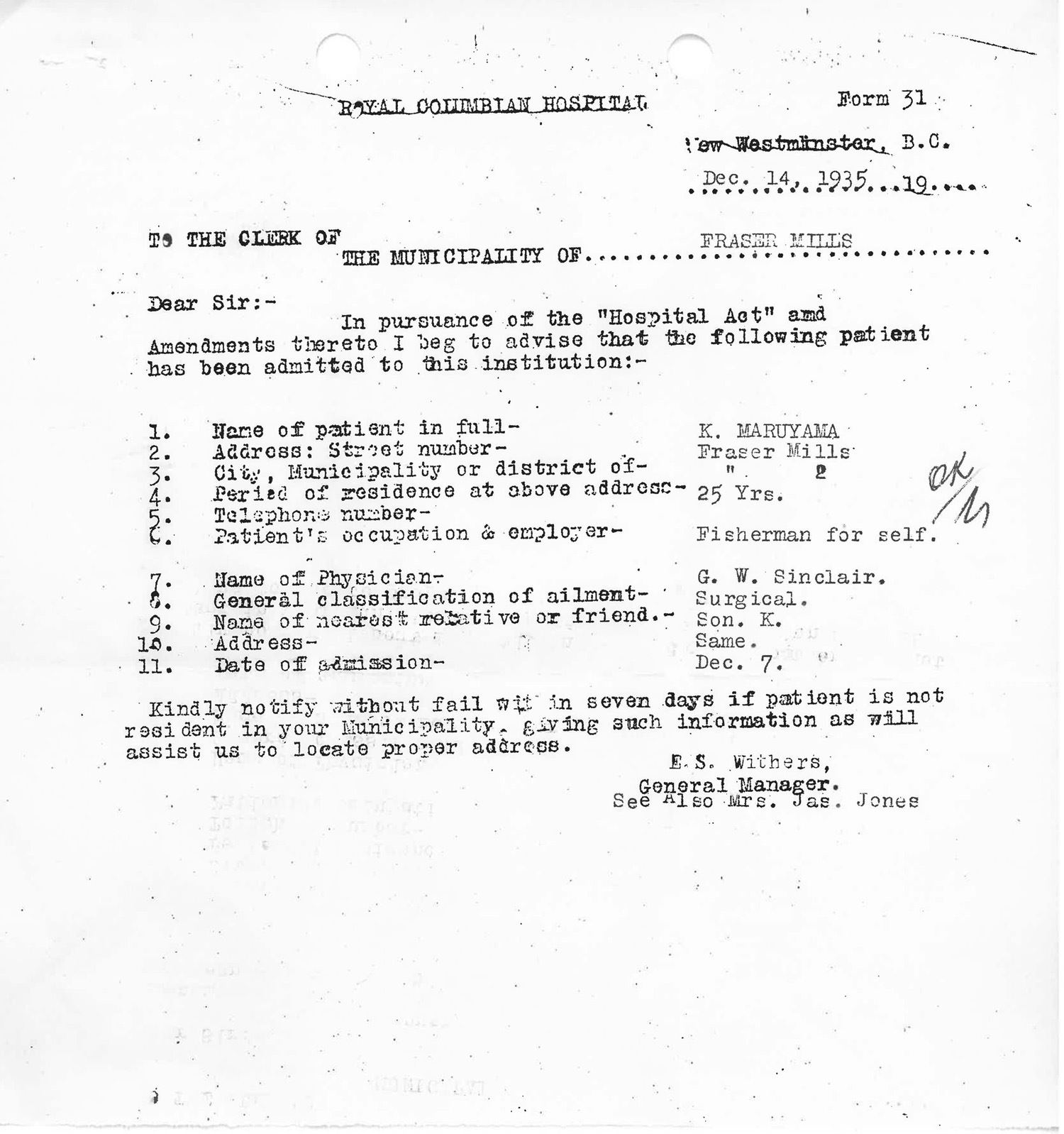 Armed with a name, I wanted to find out more about K. Maruyama, so I contacted the Nikkei National Museum and Cultural Centre in Burnaby. Their staff confirmed that Maruyama is a Japanese surname and directed me to the Landscapes of Injustice website. Here I was able to find additional information.

The "K" stood for Kiichi. Kiichi was a naturalized Canadian born in 1896. He was employed as a latheman at the Western Canadian Lumber Company, married to Tsururo Sato and had 6 children (one of which was Kin Maruyama). Records also indicate that the Maruyama family were, unfortunately, subject to a dark chapter in Canadian history as they were forcibly removed from their home at Fraser Mills and taken to a Labour Camp in Kaslo, BC on May 4, 1942 during the era of internment of Japanese Canadians from 1942 to 1949.

The Maruyama’s were not the only Japanese Canadian family to call Fraser Mills home. A further analysis of the financial records in the Fraser Mills fonds reveals that the Masumi, Watanbe, Morugama, Kitagawa, Toda and Isomura families all resided at Fraser Mills in the 1930s.

The hospital invoices that were created for administrative purposes now serve as archival records that document the Maruyama’s and other Japanese Canadian’s family histories at Fraser Mills. This is why archives are important, as they help to capture often overlooked voices and experiences that contributed greatly as pioneers to the region.

There are few archival records that document the South Asian community, predominately Punjabi Sikhs at Fraser Mills. Sadly, the City Archives only has a handful of photographs that feature pioneer Sikhs working at the Mill. 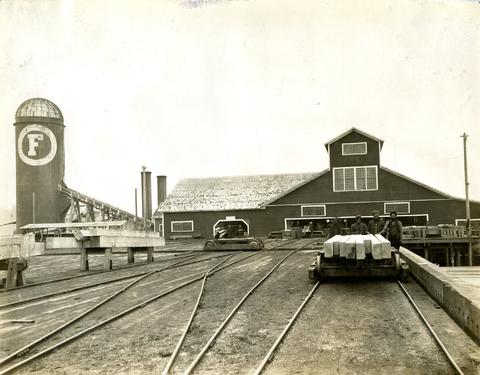 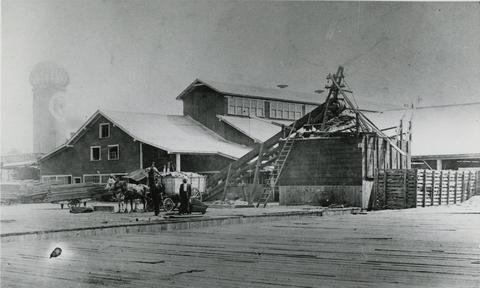 Therefore, it was exciting to discover some South Asian names among the financial records. Again, the hospital invoices provide us with evidence. Among the records from New Westminster’s Royal Columbian Hospital we find the name “Jowalla Singh.” 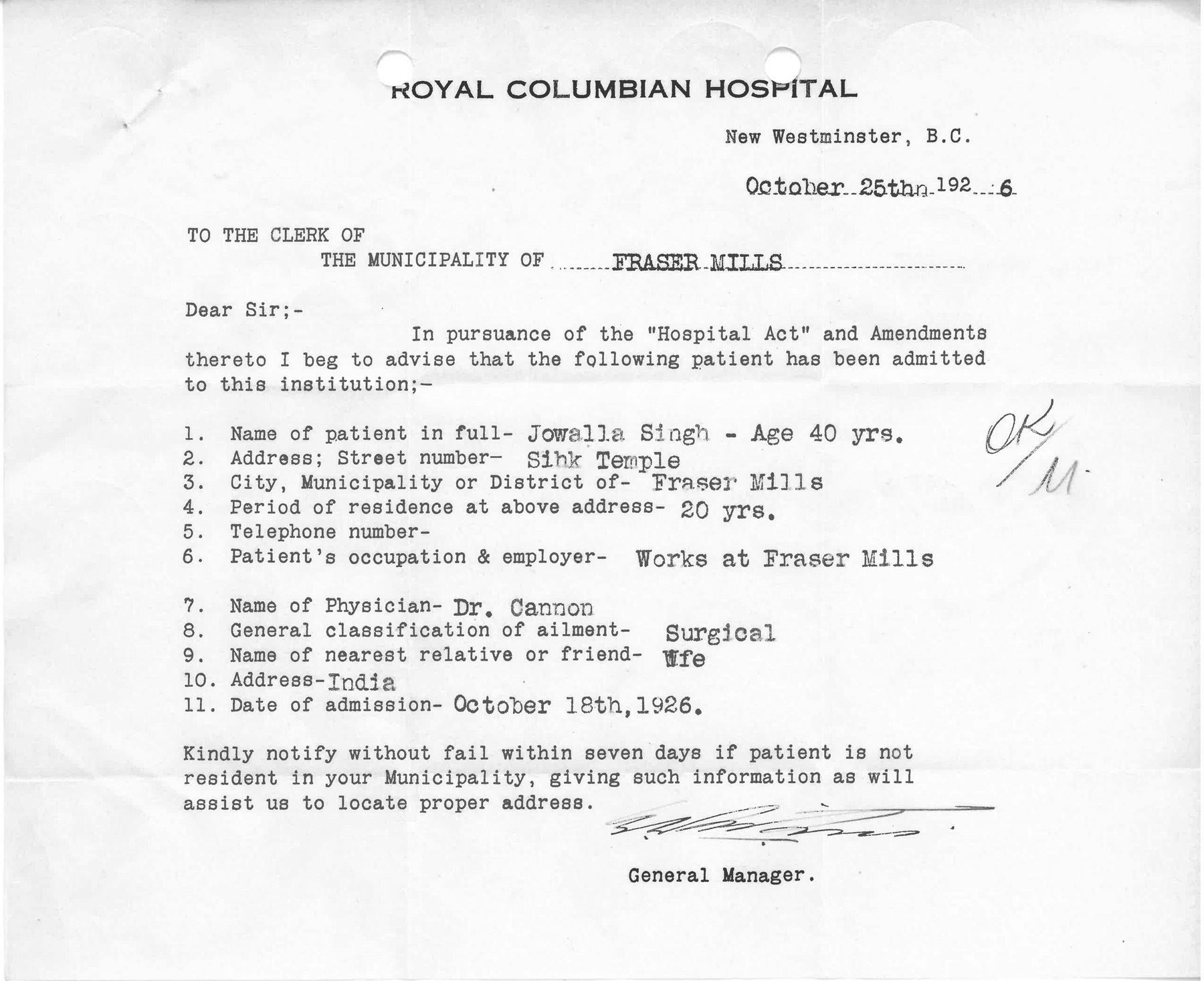 The form was created to capture the fact that Jowalla had a surgical procedure at the Hospital in 1926. However, the form also provides some fascinating glimpses into his life. Jowalla Singh was 40 years of age in 1926 and had been living in Fraser Mills for 20 years. This means that Jowalla was part of the first wave of South Asian immigrants to come to British Columbia in the early 1900s. A true pioneer.

Interestingly, Jowalla’s address is listed as the Sikh Temple — a ‘Gurdwara’ — at Fraser Mills. Unfortunately, there are no known photographs of the Fraser Mills Gurdwara in existence. So this information offers proof of the Gurdwara’s existence in 1926. The Gurdwara would have played a vital role for the Sikhs of Fraser Mills.

The form also mentions that Jowalla had a wife and her address is listed as “India.” This is in keeping with what we know about the South Asian immigrants that came to British Columbia at that time. Punitive legislation had been enacted to make it as hard as possible for women and children to immigrate to Canada. Hence, many men came to British Columbia alone, leaving loved ones in India. A simple form created for administrative purpose provides us with a window into the life of Jowalla Singh, and this is what makes archivals' records so fascinating.

A significant portion of the newly-processed records document municipal elections. The elections’ records make interesting research material for historians and genealogists alike. The voter declaration forms illustrate that an individual had to swear, under oath, that they were British Subjects and had resided in Fraser Mills for the year prior to the election. The voters lists contain lots of information: names, occupations and addresses are tallied. The lists show how small and consistent the voting community was, with voters lists staying remarkably similar throughout several years. The same individuals appear annually. Perhaps more tellingly, they are silent on the individuals who were denied that opportunity. Especially as we know that Fraser Mills was a diverse and multicultural community. 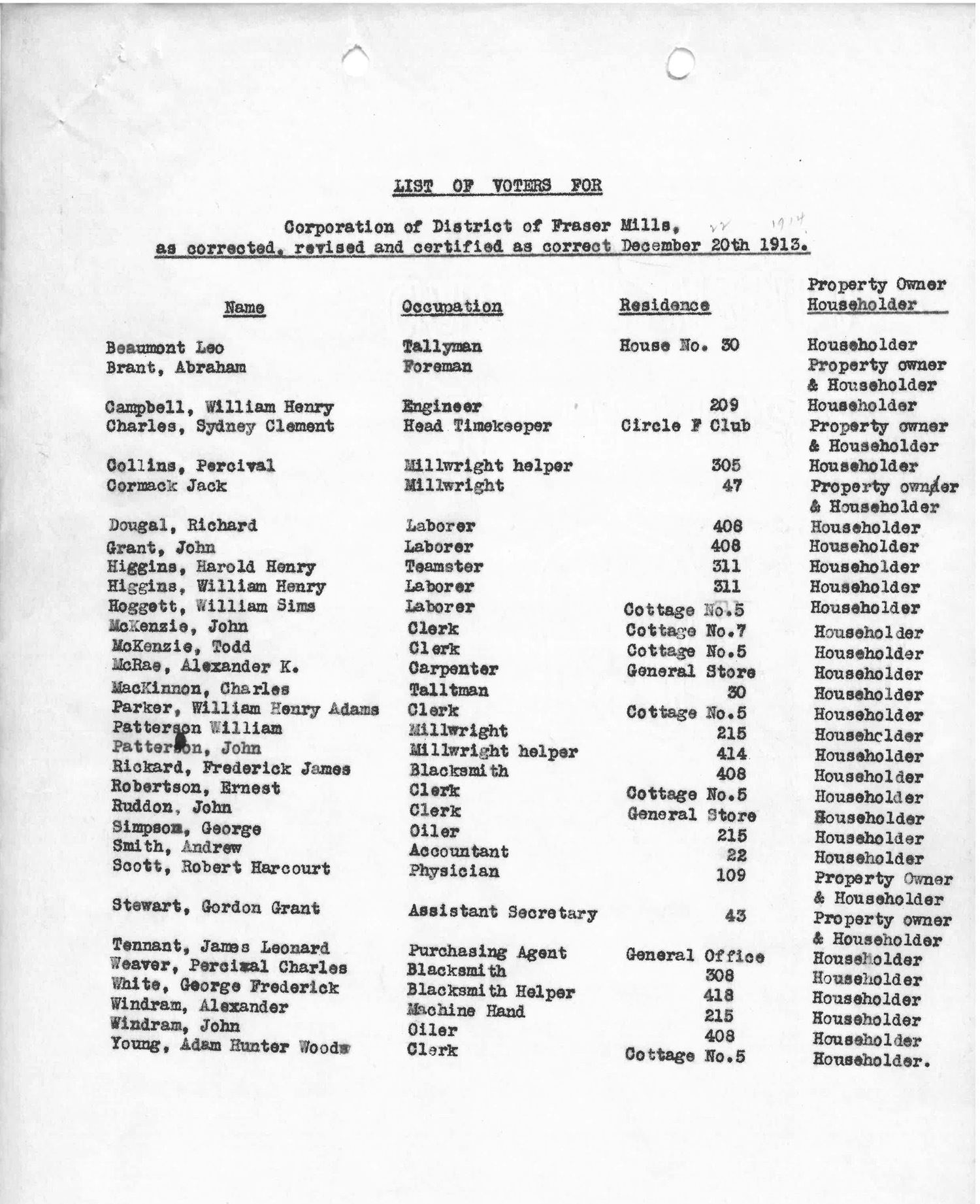 There are several files of incoming and outgoing correspondence addressed to and from the Reeves of Fraser Mills from individuals from various levels of government. The correspondence speaks to all aspects of life in the municipality. One example is a letter from August 1929 from the Attorney General (AG) of British Columbia to the Reeve of Fraser Mills, F.G. Wrightson. 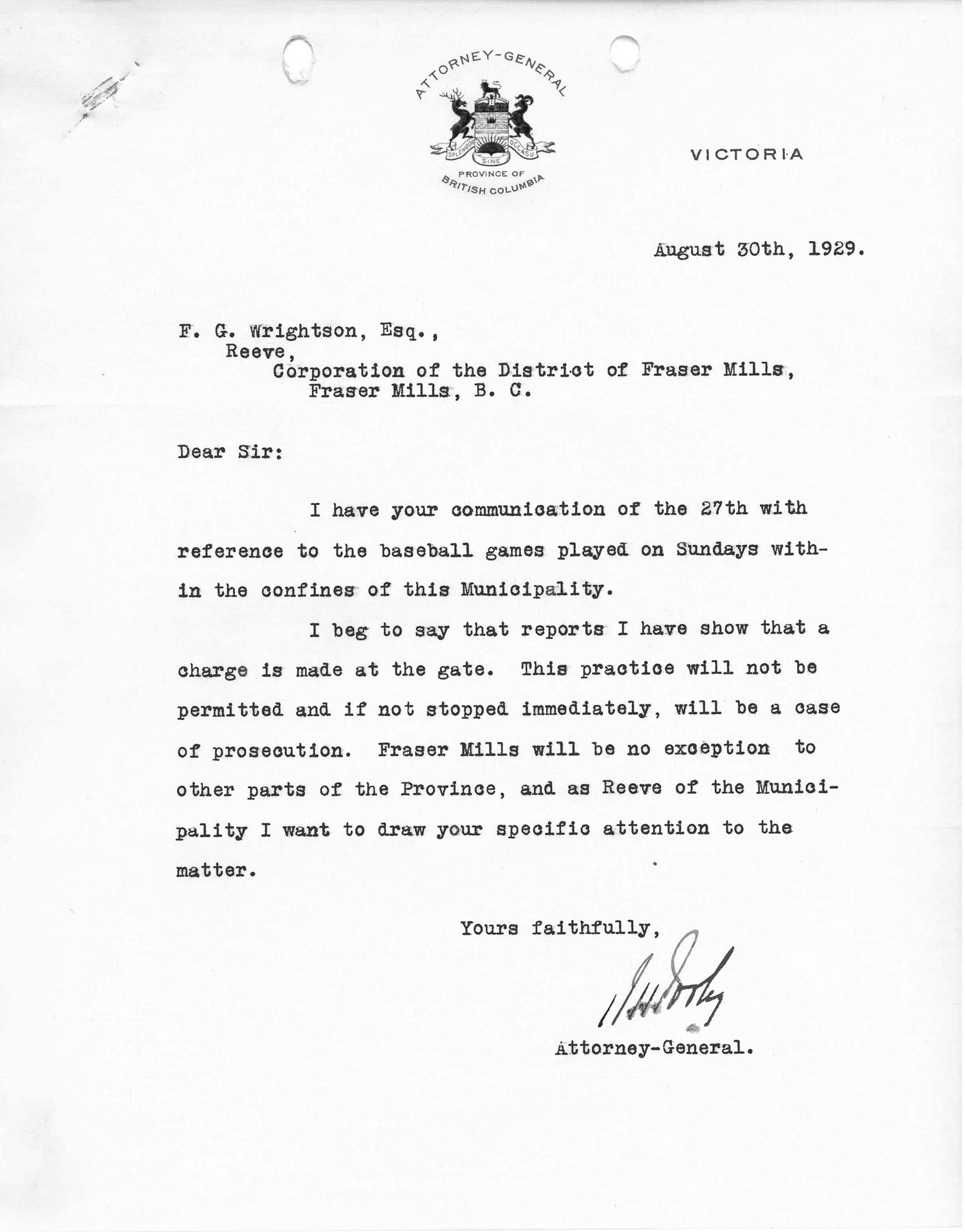 In the letter, the AG warns Wrightson that it has been brought to his attention that baseball is being played on Sundays in Fraser Mills and that an admission fee is being charged and. if this practice is not stopped, prosecutions will ensue! The AG’s concern is due to the Lord’s Day Act, which prohibited monies being collected for sporting activities on a Sunday. This exchange provides insight into the Fraser Mills community’s fondness for baseball. as well as the social mores of 1920 British Columbia.

The newly processed Fraser Mills records provide a wealth of information about the municipality and serve as starting point for anyone who is interested in its history. They address a gap in the municipality’s documentary heritage, as until now, there were few archival records to consult. The financial records, correspondence and minutes represent an opportunity for researchers to explore a diverse municipality that is no more. 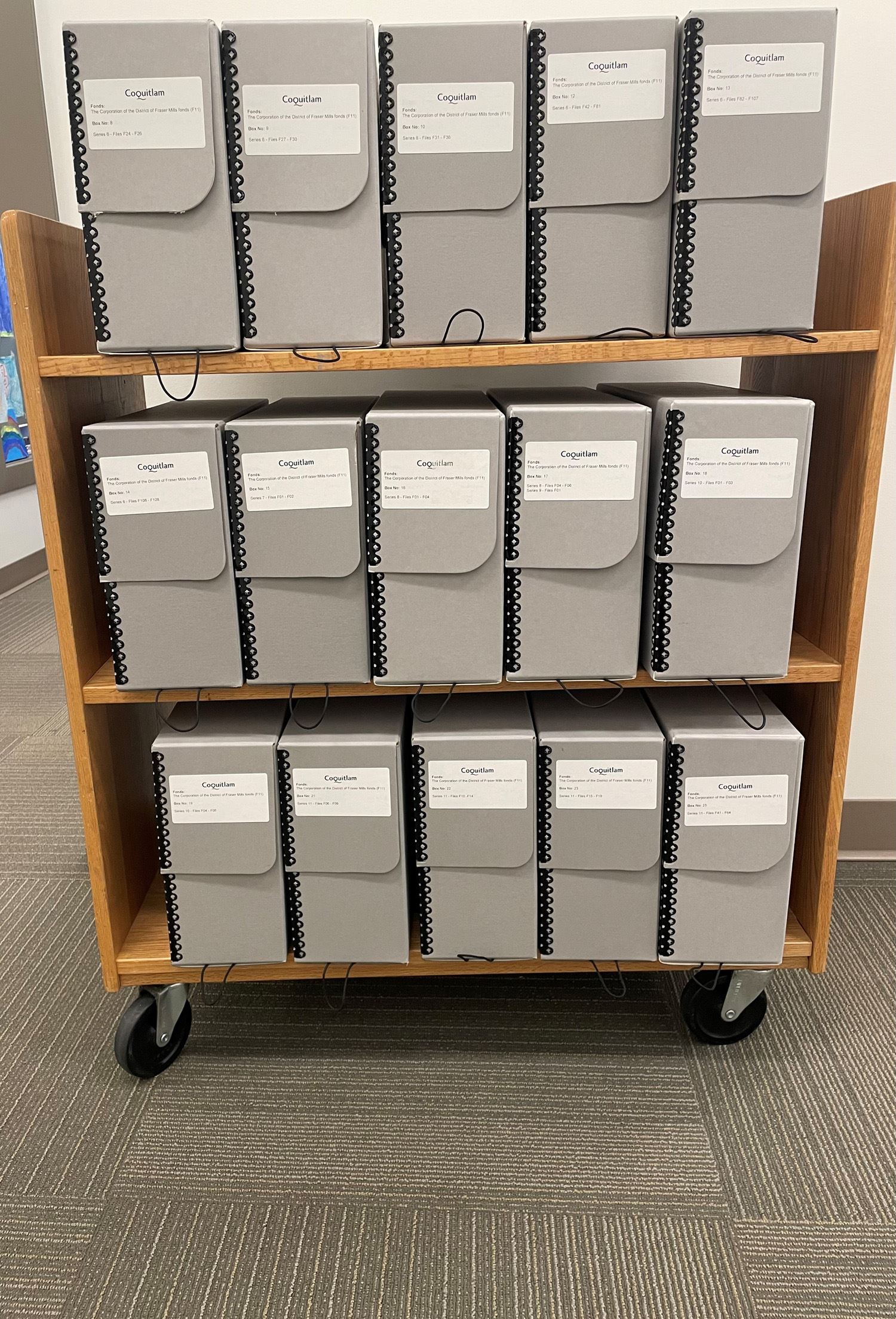