Plywood - The Material of Unlimited Uses

The Canadian Western Lumber Company Limited was the first producer of plywood in Canada, commencing production in 1913 in Fraser Mills.

The City of Coquitlam Archives holds company records such as schematics of machinery and technologies used, and advertising materials from the 1940s to the 1960s. This exhibit showcases some items from this collection as well as other related items in the Archives.

Plywood is a timber material made from thin sheets of wood glued together. It is a durable and light construction material sold by the sheet and used for a variety of large-scale construction and small-scale home improvement projects.

Though laminate processes have existed for many years, plywood as we know it was not patented until the mid-19th century and the industrial production of plywood only began in the 20th century.

The early plywood industry was founded upon the large-sized logs available in old-growth Douglas Fir stands all along the Pacific coast.

Plywood was an innovative lumber product for its time: 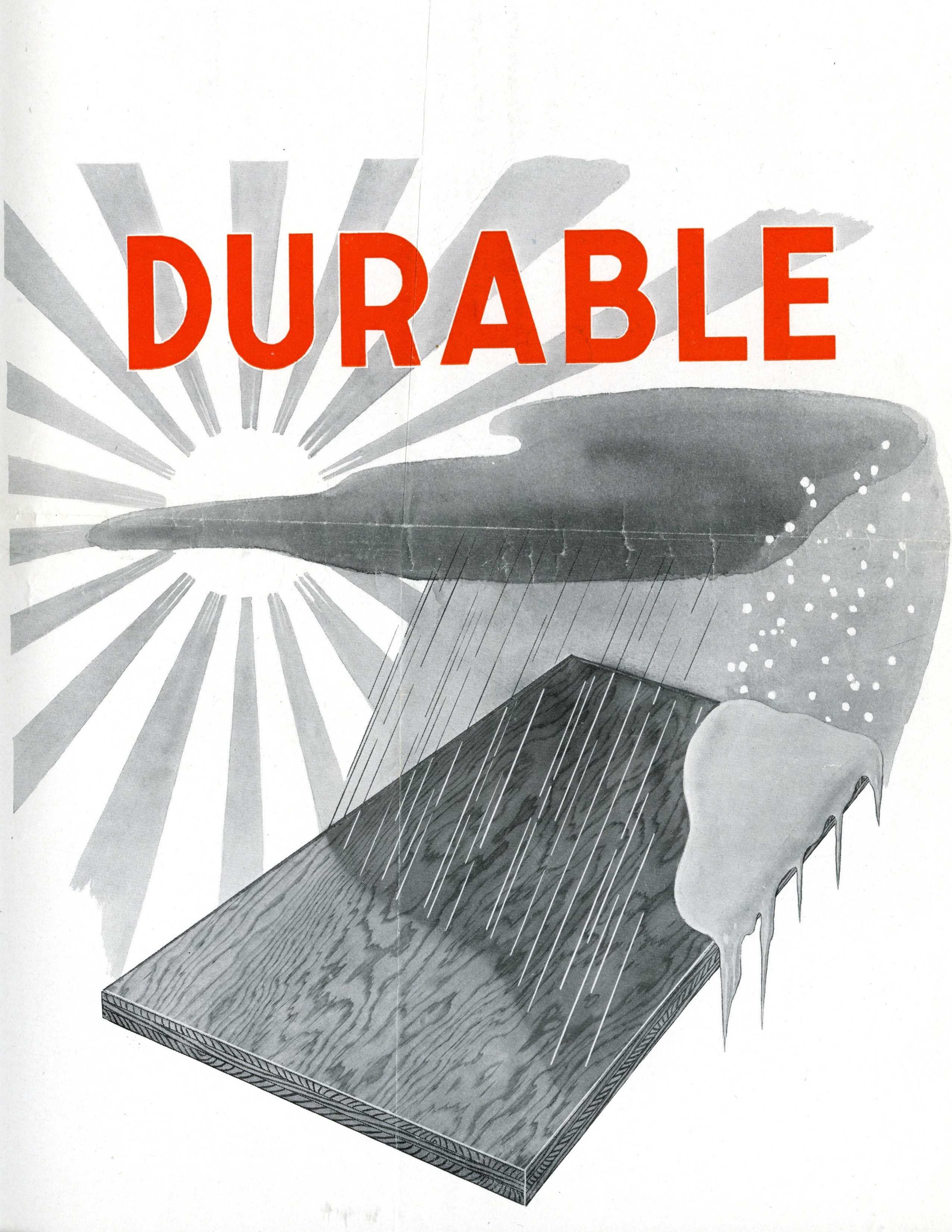 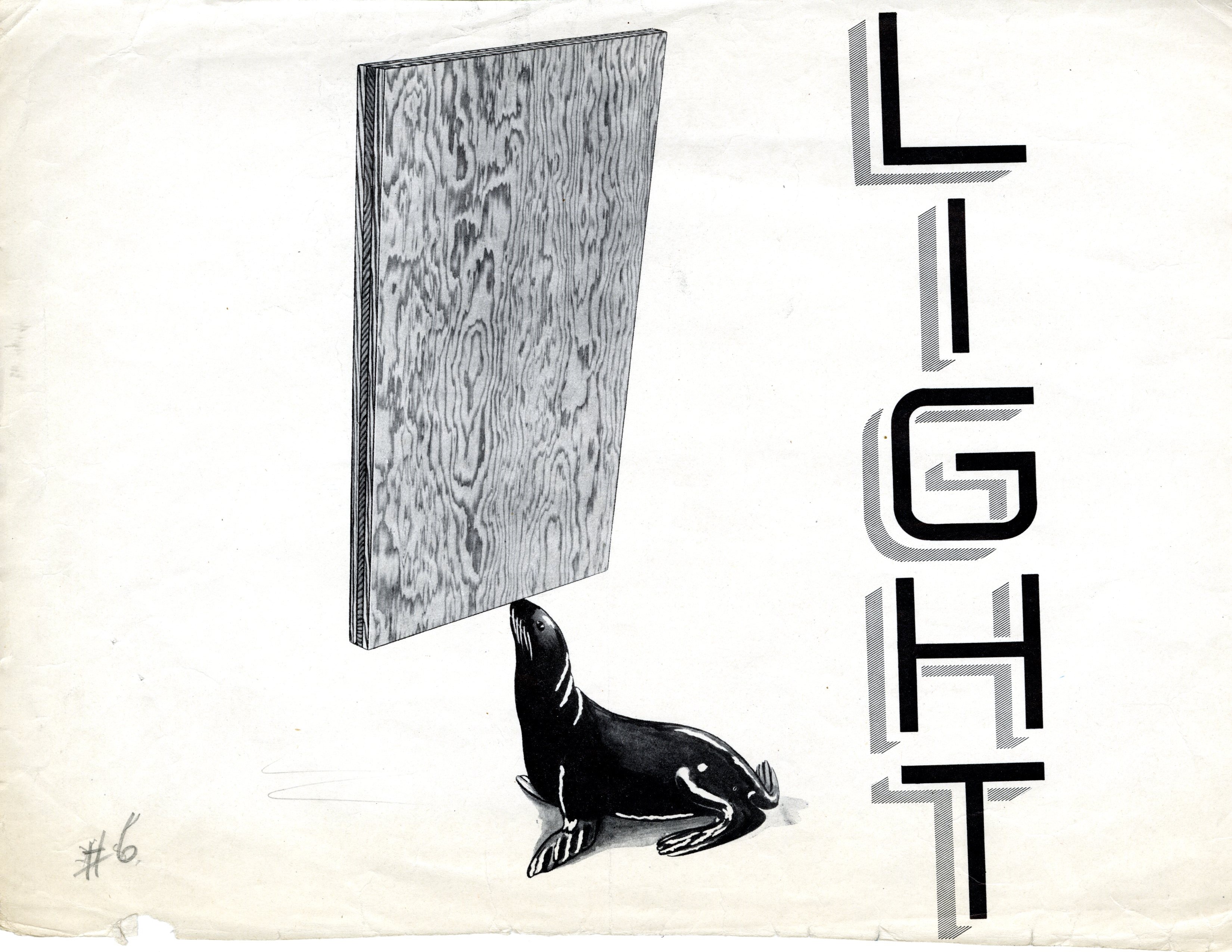 The Canadian Western Lumber Company produced pamphlets and advertising materials to attract the home handyman as well as building professionals and people in related industries.

Some of the illustrations that follow come from company information brochures from the 1940s to the 1960s that described the manufacturing process.

The first step was to remove all bark from logs. This was an important step because any remains might damage or clog the machinery further along the production line. The logs were then cut to length.

Pictured in the following photo: Logs that have had their bark removed and have been cut to length are waiting in the water for their turn in the lathe. 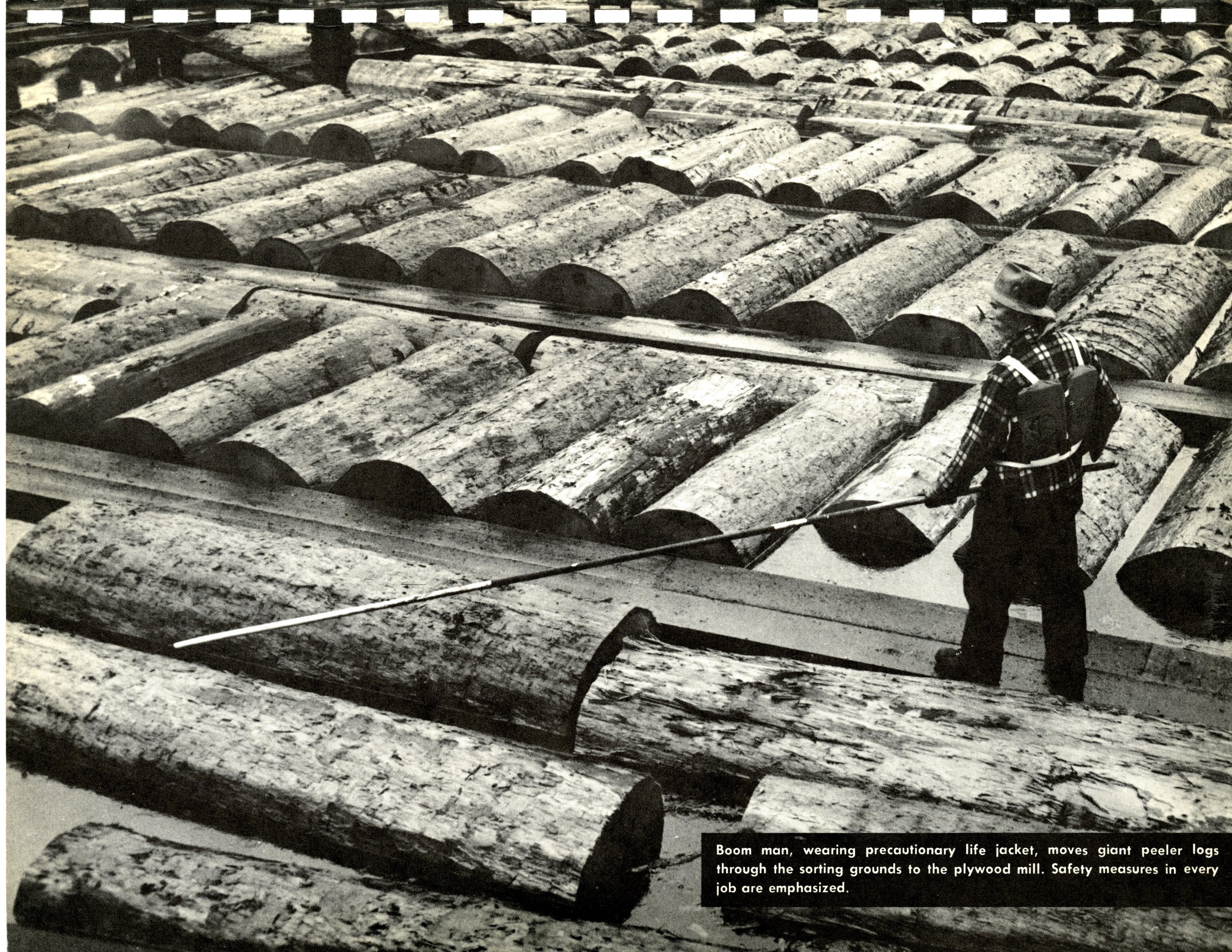 The log was then placed on a lathe where the layers of wood that would make up the ply were "peeled" from the log in a variety of thicknesses depending on the type of sheet being produced. These were called "veneers." 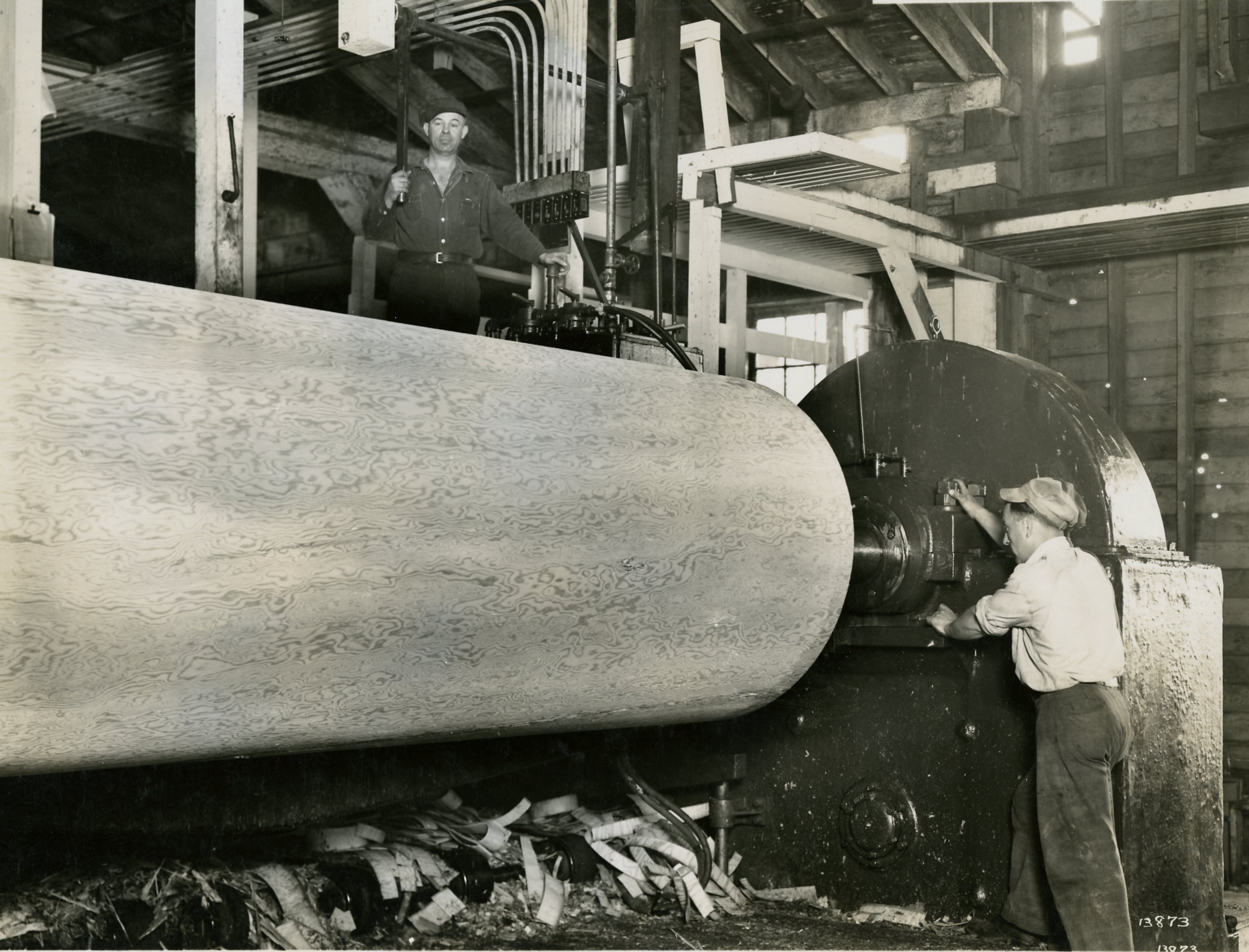 The veneers were then sorted and clipped to standard size.

Coquitlam resident Thelma Smith Caddy, who worked in the veneer division during the Second World War recalls that the clipper would take out all the knots when the wood was wet; then it went through the dryer and through to the patchers, where the little holes were patched up. (Coquitlam 100 Years, page 188) 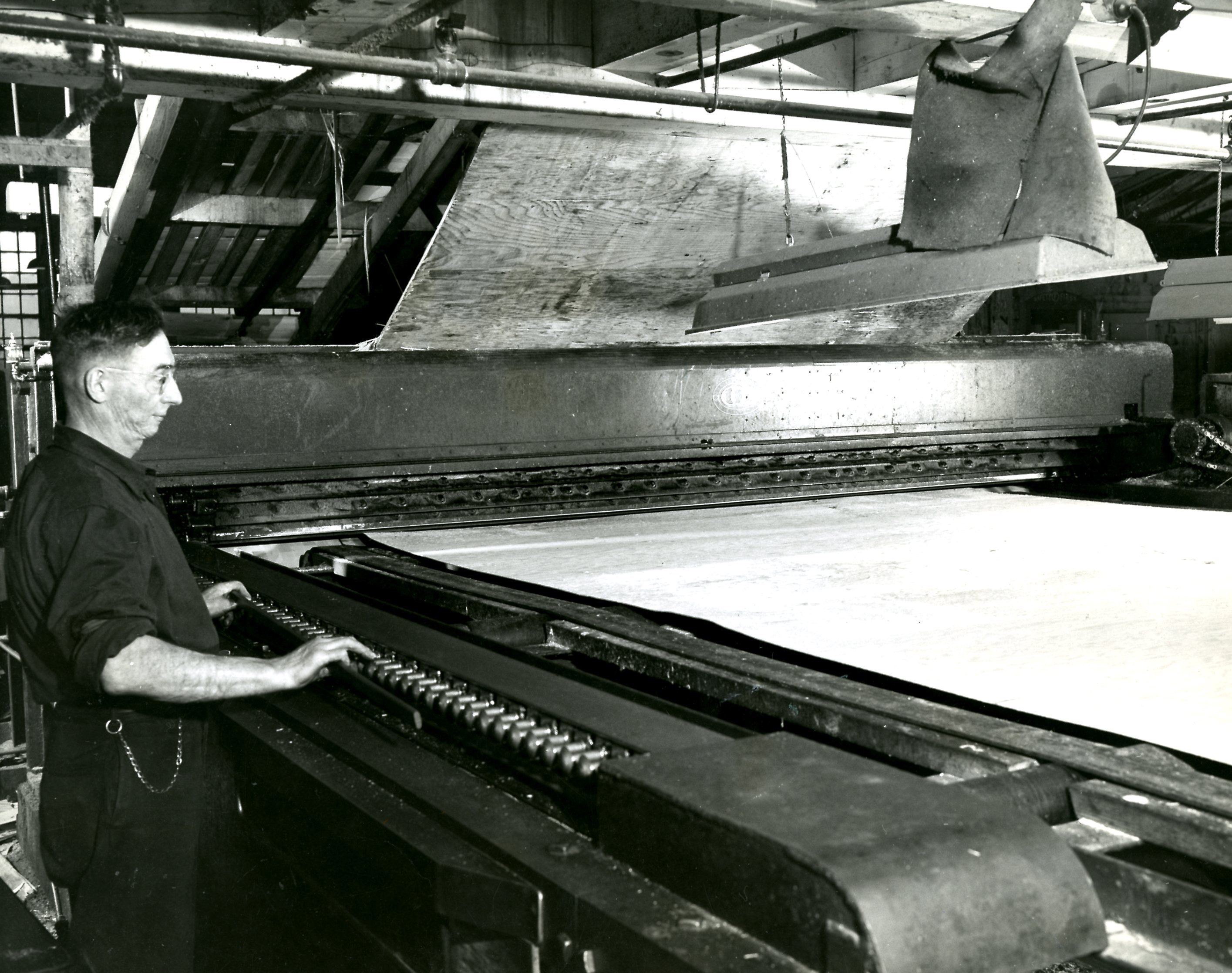 The panels were then dried in a veneer dryer. The dryers were somewhat prone to overheating. Coquitlam resident, James Aitchison recalls that, they used to have the odd fire in the dryers in the plywood factory but they’d get them out pretty quick. (Coquitlam 100, page 247)

The wood panels were then placed in a hot press and glued. The sheets were then trimmed and sanded. Finally, they were graded and bundled, ready for shipment.

In the early days, plywood was used exclusively for interiors, particularly for the manufacture of doors. This was because the locally-sourced glue was not weatherproof.

Harold Schiefke recalls that in the 1920s:

The plywood was first made with glue from Swift’s slaughter house, and came from the cattle they slaughtered. I used to help Stuart Aldridge, and we would go twice a week and get five-gallon cans of blood from Swift’s. They would mix preservative into it. (Coquitlam 100, page 87)

Sydney Parker Skerry’s father was an employee at Fraser Mills during the same time period. He recalls that his father would experiment with glues in the basement, soaking the different ones in water to see which would stay. (Sydney Parker Skerry, Coquitlam 100, page 175)

Some of the pitfalls of casein glue are described in this 1930 letter. 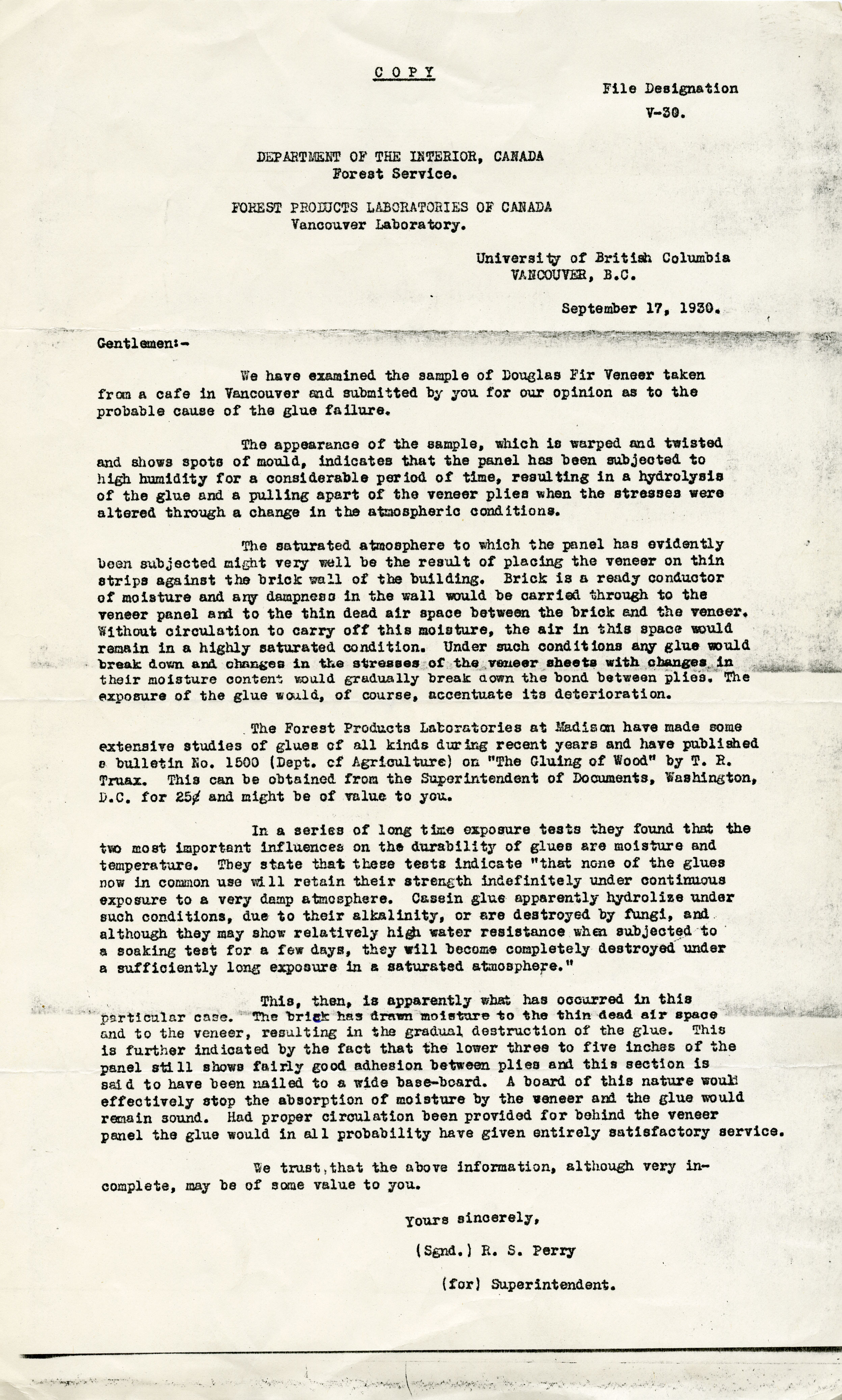 Advances in glue technology transformed plywood from a material primarily used for internal structures to a durable, weatherproof product.

Around 1934, a completely waterproof adhesive made from phenol-formaldehyde was developed, which was a game-changer for plywood manufacturers throughout North America.

The Canadian Western Lumber Company developed a weatherproof product called "Weatherply," which was marketed for a multitude of uses, starting in the 1940s. At the same time, many other plywood products such as "Gridply," "Artply," and "Veedply" were marketed for a variety of other practical and aesthetic purposes. 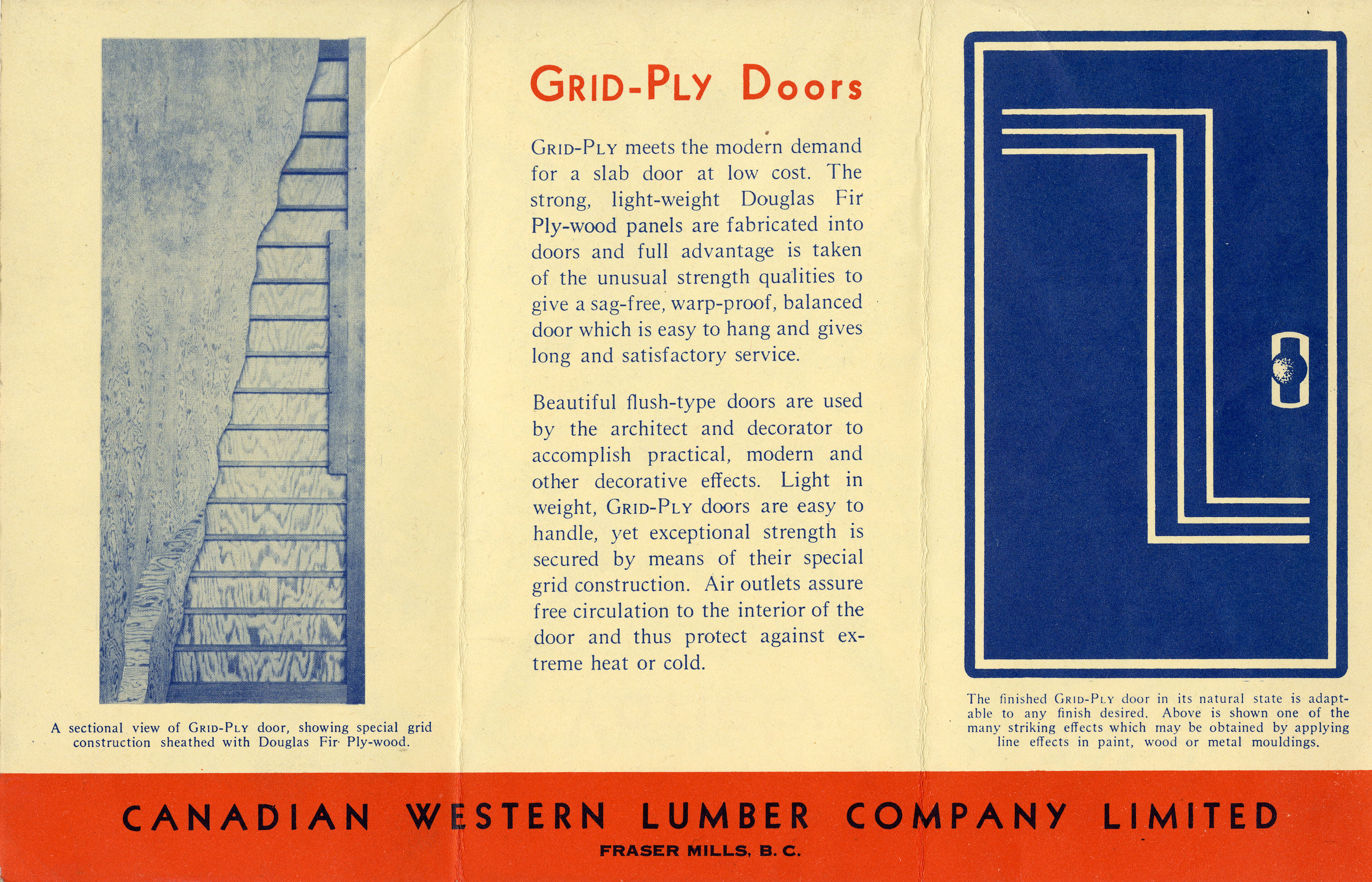 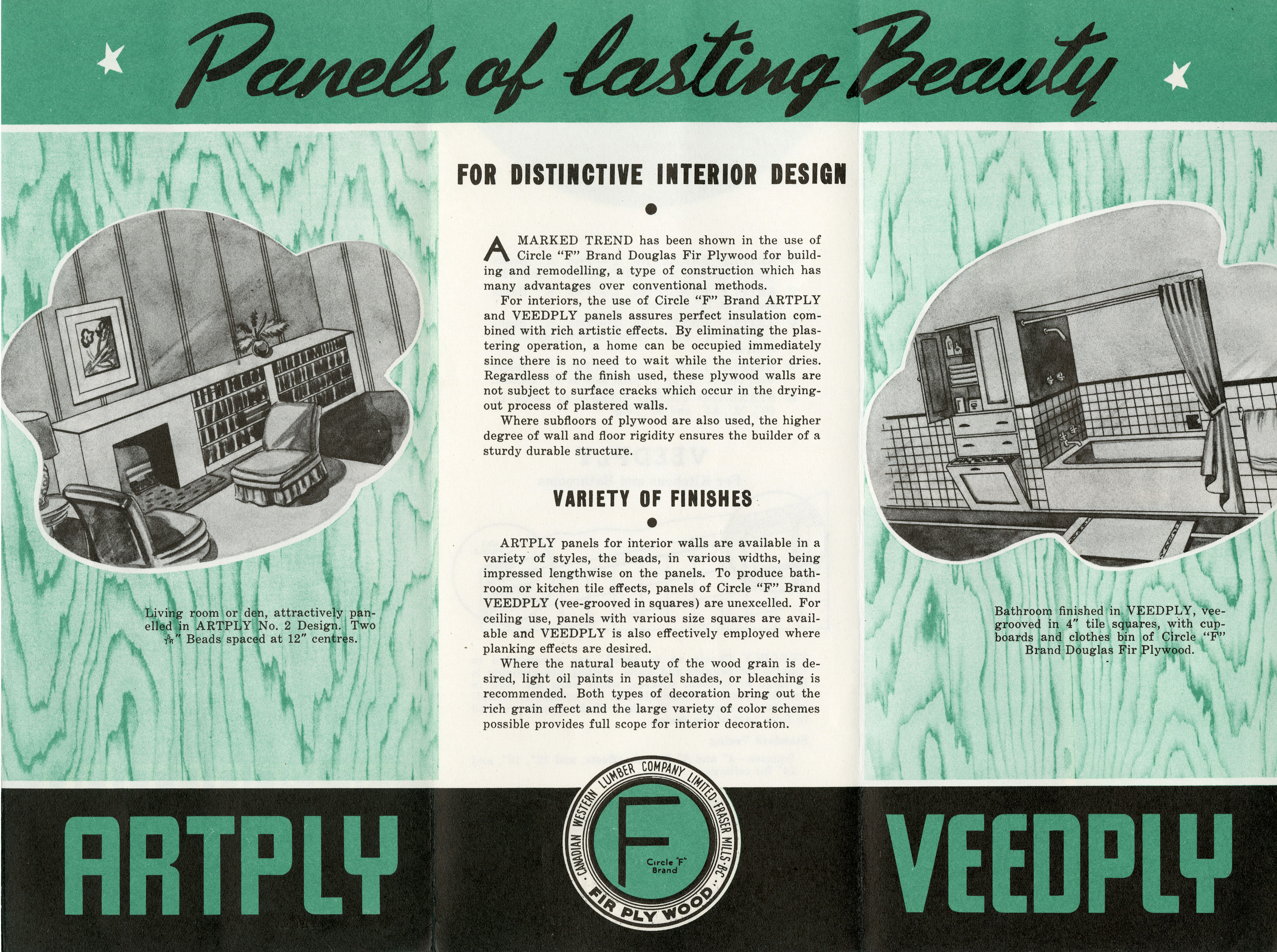 During the Second World War, mills and factories were kept very busy producing replacements for manufactured goods destroyed in transit.

Plywood was used for the manufacture of many wartime products, including bombers, barracks, gliders, boats, and as crating for machinery parts. The waterproof Weatherply was promoted as an ideal material for many military needs. 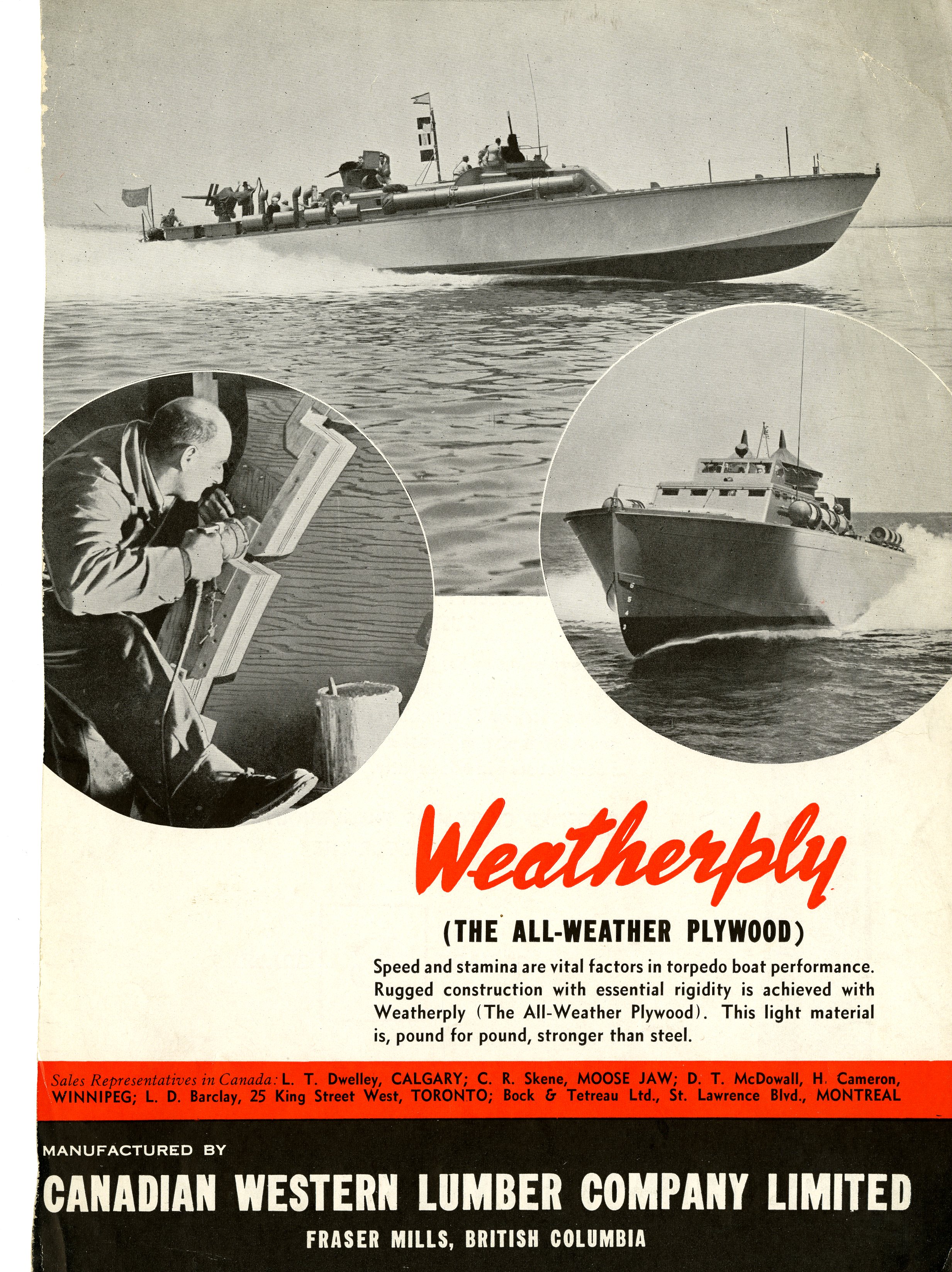 An issue of the magazine Lumberman describes the upcoming upgrades to the plywood machinery, a measure taken to increase production by up to 50%.

The Canadian market absorbed 95% of the Canadian Western Lumber Company’s plywood production after the war, a shift from wartime when 50% of materials were exported to the United Kingdom. 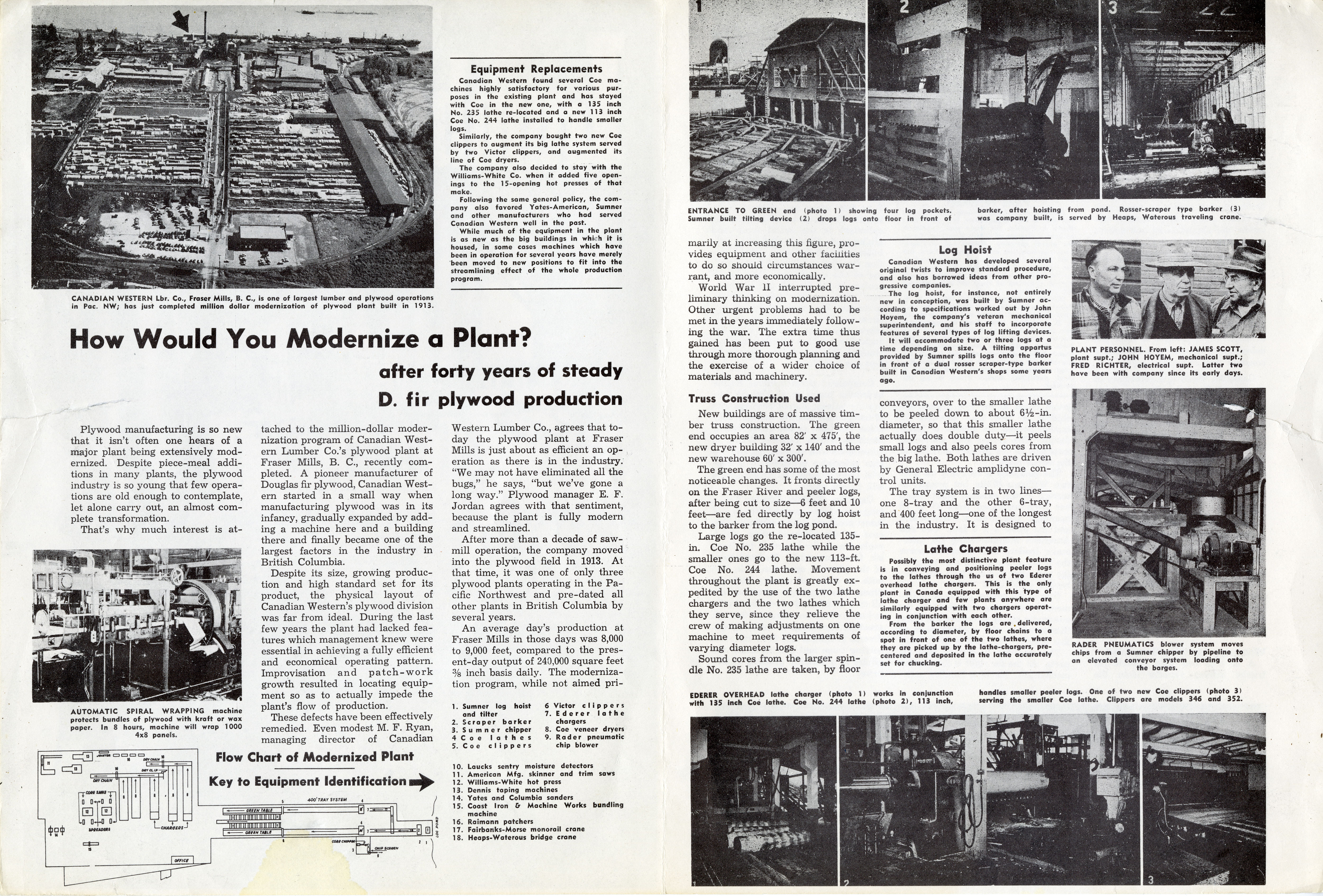 These leaflets show some of the purposes that Weatherply could be put to closer to home.

A keen handyperson might make use of it to make small boat, or even a ping pong table that converts to benches afterwards, or they might find a practical use on the farm. The reverse of the leaflet listed the specifications and instructions. 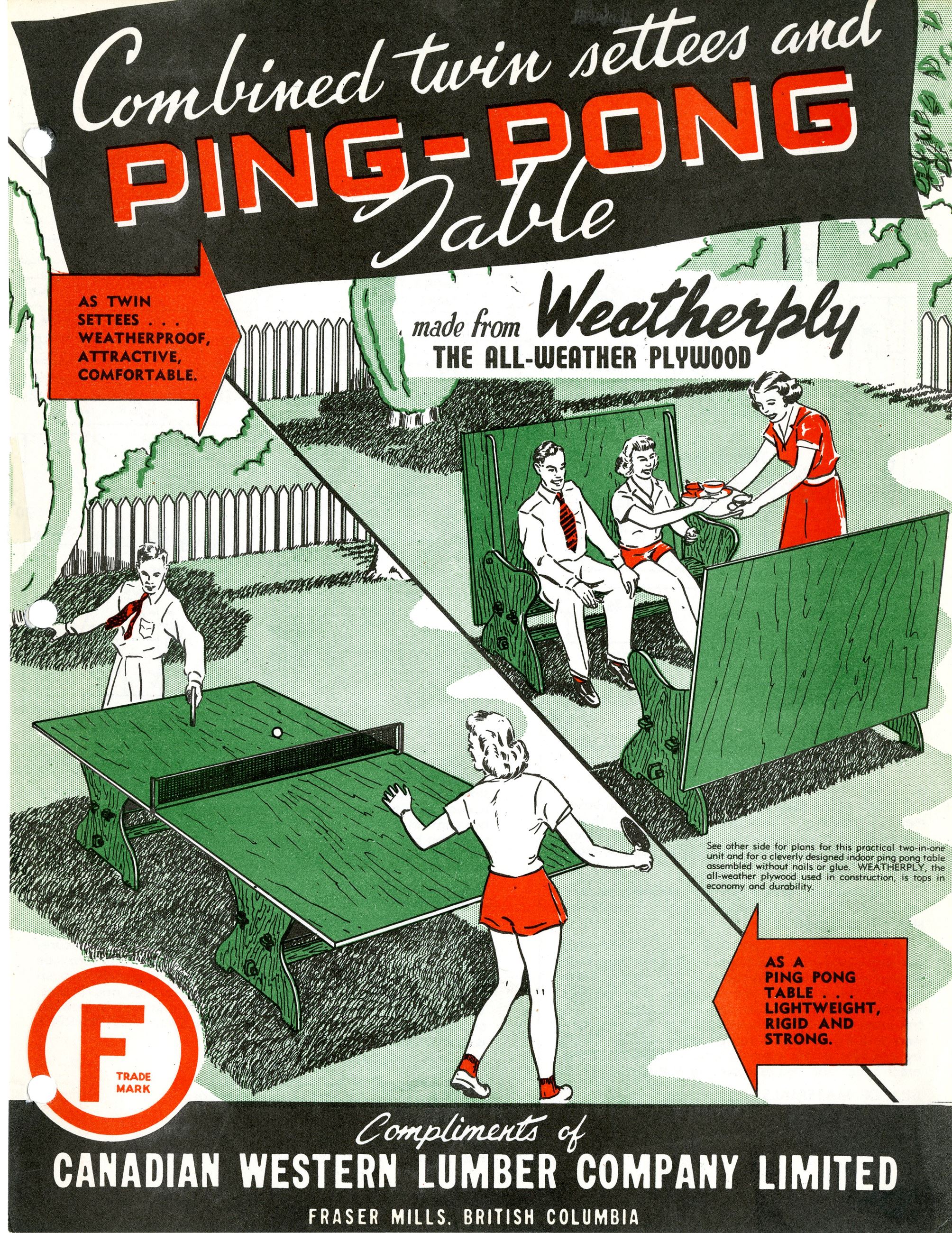 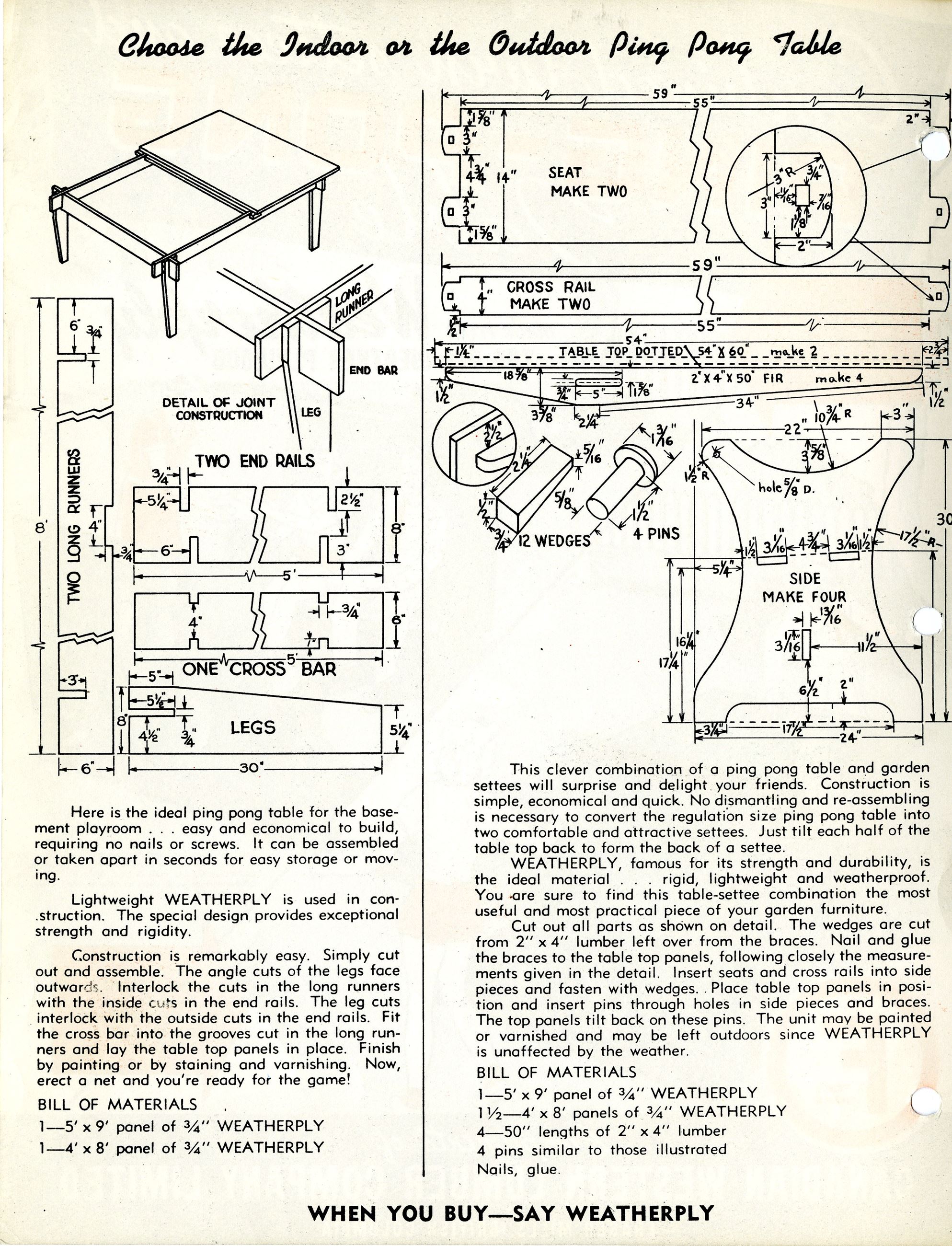 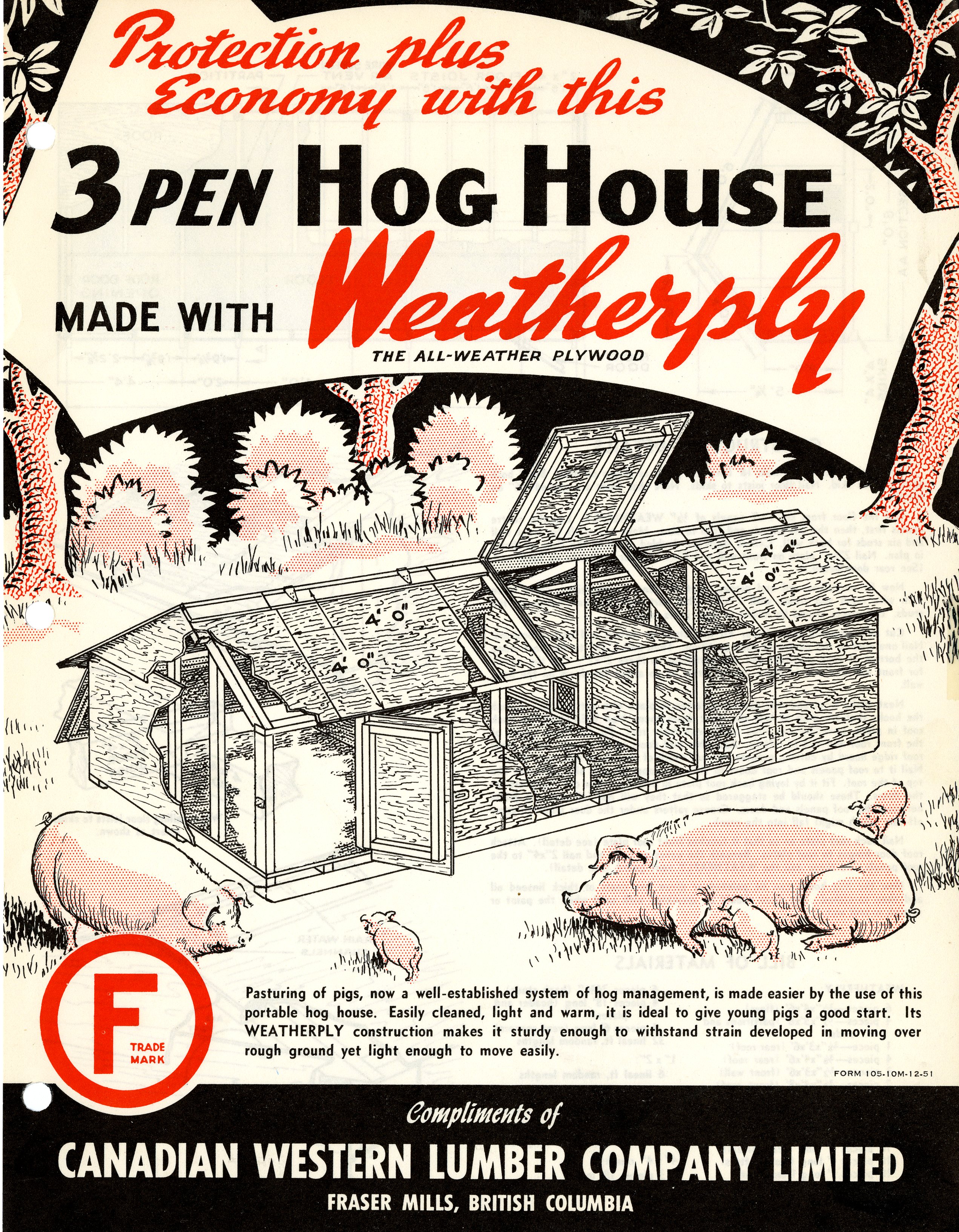 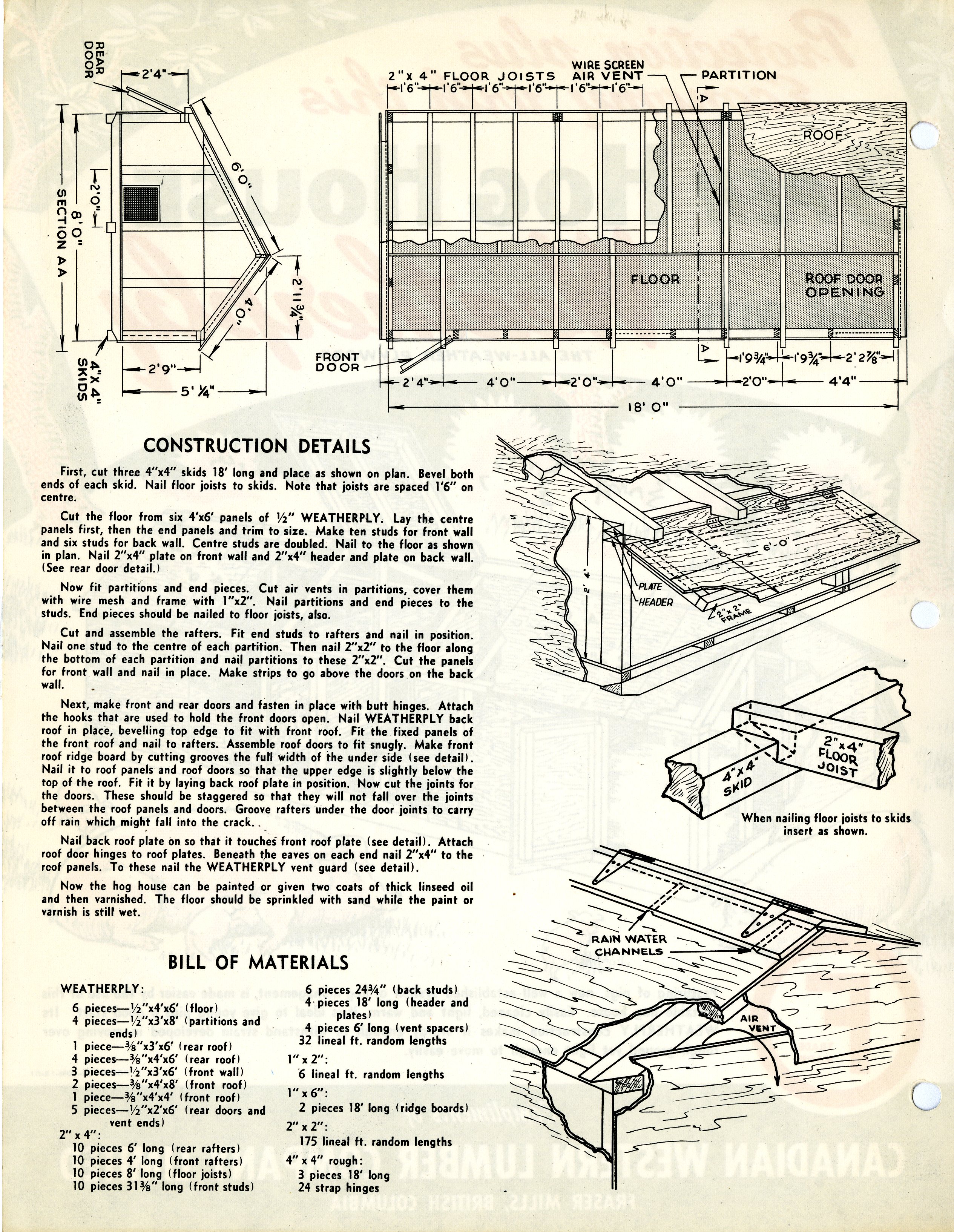 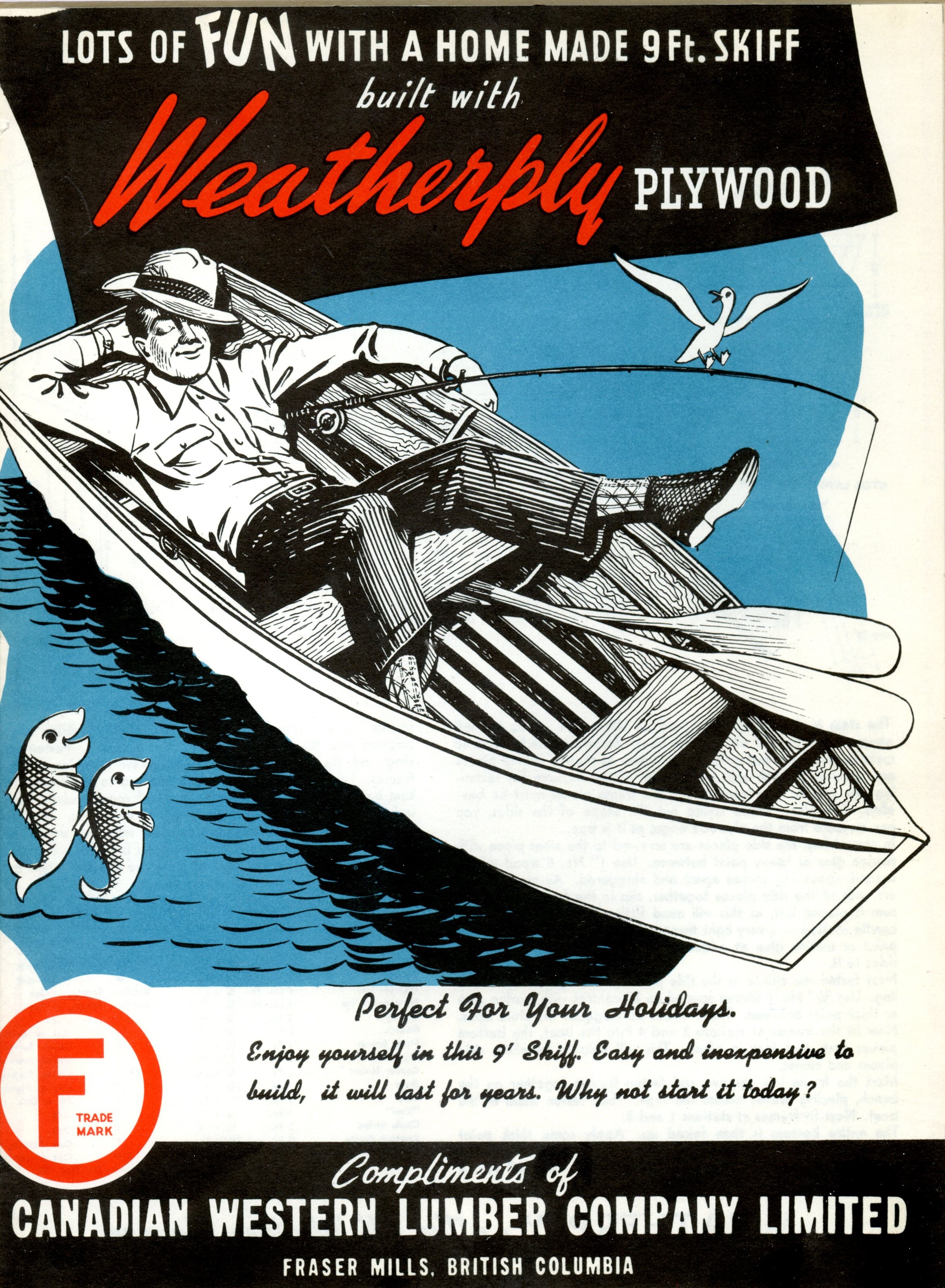 As the century progressed, the importance of Douglas Fir plywood waned and with it the dominance of the Canadian Western Lumber Company. Changes in technology led to the manufacture of plywood from other timbers such as hemlock, spruce and balsam, which enabled production in other regions.

While western plywood no longer dominates the scene, to this day plywood remains one of the most useful and versatile building materials available.

It really is "the material of unlimited uses." 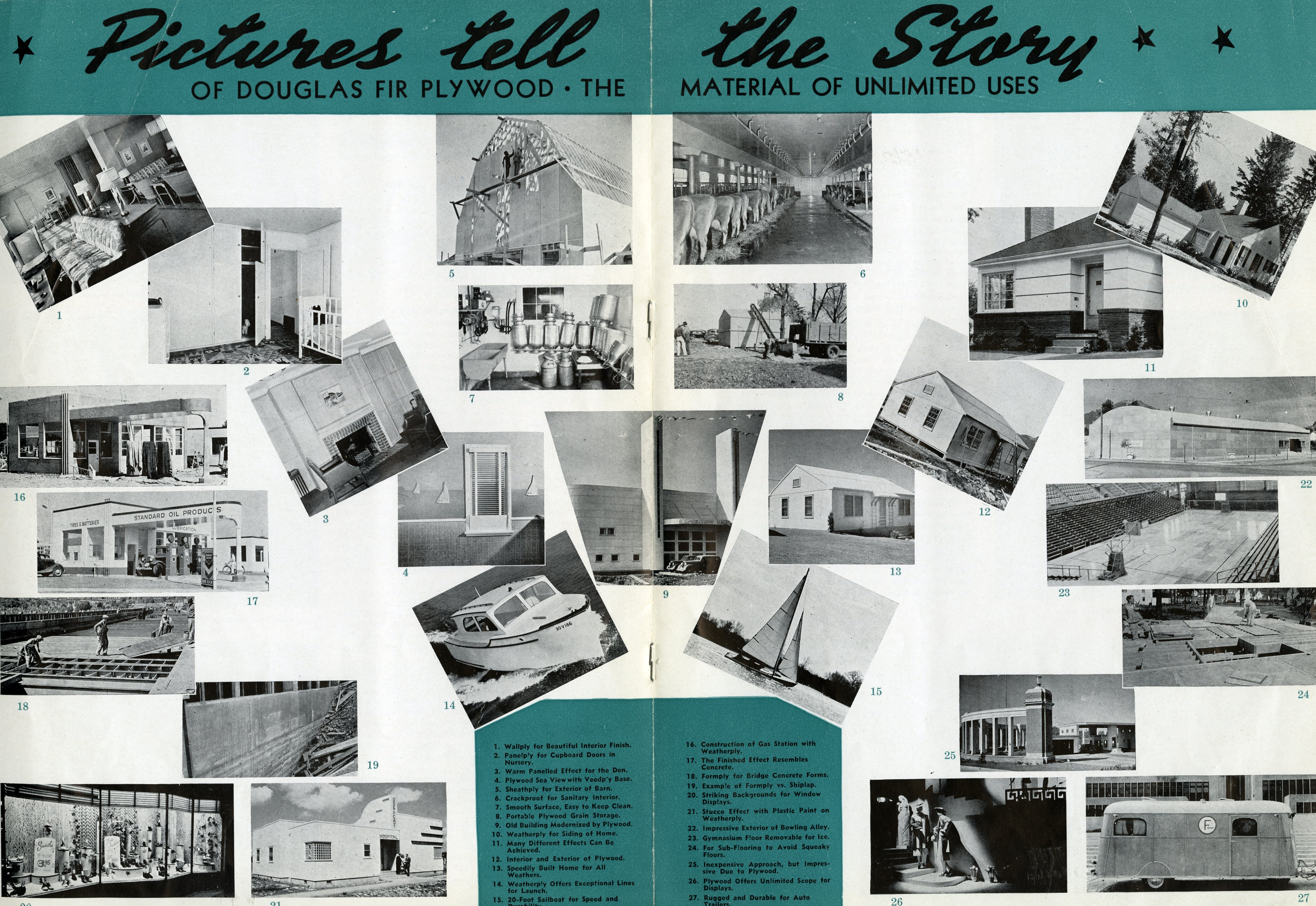