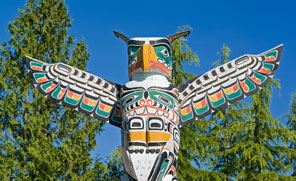 In 1967, to commemorate Canada’s 100th birthday, the Columbian Newspaper initiated The Centennial Totem Pole (PDF) project. The project is a tribute to the local First Nations, and reflects on the changing attitudes of the public, moving towards an inclusive vision of the community and its place in Canadian history.

The pole is carved in the Kwakwaka’wakw tradition of North West Coast First Nations art, as local Coast Salish First Nations art practice was not publicly prevalent at the time. The figures on the pole represent from top to bottom, Thunderbird (with bear depicted on his chest), Raven with Salmon and Killer Whale with man on his back.

On May 15, 2007, the totem pole was relocated slightly northwest of its original location, as part of the City’s Dogwood Pavilion expansion and improvement project.

Lloyd Wadhams Senior was the eldest child born to Don and Mary (Dawson) Wadhams. Lloyd learned to carve on the beaches of Alert Bay. Sitting on Charlie James’ carving shed, Mungo Martin and James Sewid taught him the traditional art form. As a child he used to watch them carve with his uncle Don Dawson and his cousin Amos Dawson. Every day they would carve little canoes and totem poles to sell to tourists.

Lloyd carried on the tradition of teaching carving to his cousins, nieces and nephews of the Shaunessy and Sewid families. Lloyd sold most of his work to galleries. As a commercial artist he was constantly experimenting with tools and methods to produce his art. He worked mostly with wood, silver, gold and print media.

At one time Wadhams lived in Maillardville, a neighbourhood within the City of Coquitlam known for its French heritage.

John Edward (Ted) Neel Junior was born on January 4, 1939 in Vancouver, BC. Born to Ellen Kakasolas (Newman) and Edward Lyle Neel, he was the second oldest of seven children.

John began designing, painting and carving around the age of 10, as part of his family’s Totem Art Studio business. His mother, Ellen Kakasolas Neel, taught her children the artistic traditions of their Kwakwaka’wakw lineage. Working alongside his eldest brother, Dave Neel, and younger brother, Bob Neel, John quickly mastered the basics of formaline design, and quickly started work on larger commissions such as masks, plaques, welcome figures and totem poles. Throughout the mid 1940s to late 1950s, John also worked alongside his parents, brothers, and younger sisters in producing thousands of ’model totem poles’ and other hand-carved pieces for the Vancouver tourism and souvenir market.

Robert (Bob) Wonnock is a Kwakwaka’waka carver whose fine art is sold around the world. Very little is known of Whonnock’s personal life.